After some technical difficulties with the projector, the Seabeck Haiku Getaway 2017 began with an introduction by Michael Dylan Welch, presentation by guest speaker Scott Mason, amazing performance by Terry Ann Carter, and other sessions. 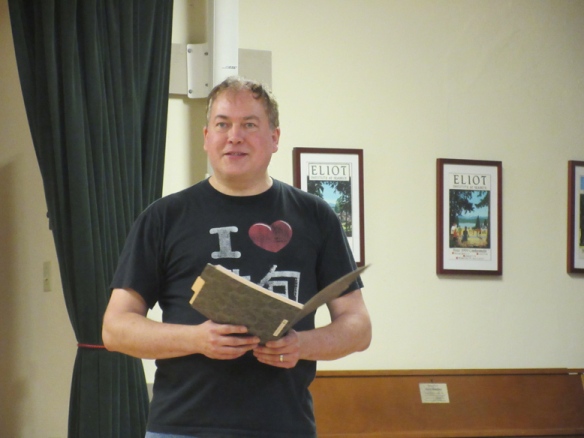 Michael Dylan Welch and his famous “I Love Haiku” t-shirt.

Terry Ann Carter wearing a beautiful kimono for her reading of “Tokaido”.

Stay tune for more comics from the conference.

Whether you’re a haiku poet, photographer or haiga artist, postcards are amazing promotional items to bring to a conference.

The most common postcard sizes are:

You’ll find templates in many software like Word, Publisher, InDesign. Many printers offer templates on their website.

Postcards can be expensive to print.  However, the more you print, the less it costs per unit.

At my local print shop you can get 20 postcards for $15 or 100 postcards for $35. If you want something printed on the back, there’s an extra $10 fee. Shop around to find the best deals.

Make sure to order early as delivery can take some time.

If you’re considering making postcards for your next conference, here are some examples to get you inspired.

This beautiful reversible postcard, handmade by Julie Bloss Kelsey, is one of my favorite freebies of all time.

It has everything I like: great haiku, nice paper, good handwriting, 3D objects. Well done!

If you’ve published a book, a postcard is an excellent promotional tool. I like this simple postcard by Roberta Beary because it promotes her book The Unworn Necklace simply using a beautiful photo and haiku, instead of the usual book cover, making it a beautiful keepsake. 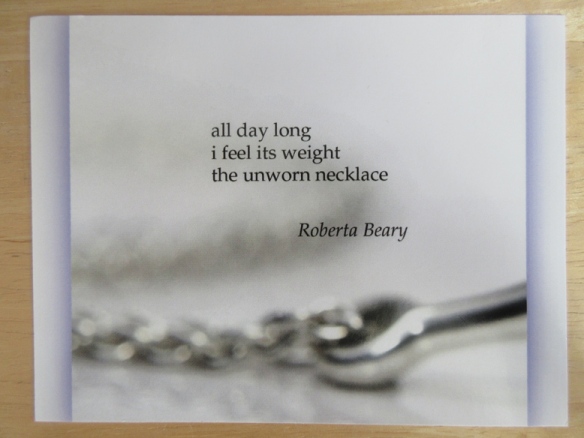 These two postcards are actually 4×6 photographs printed via Shutterfly. On the back, photographer David Giacalone printed his contact information.

At HNA 2015, Terry Ann Carter performed her beautiful Chiyo-ni tribute and distributed these postcards to commemorate her unforgettable performance. 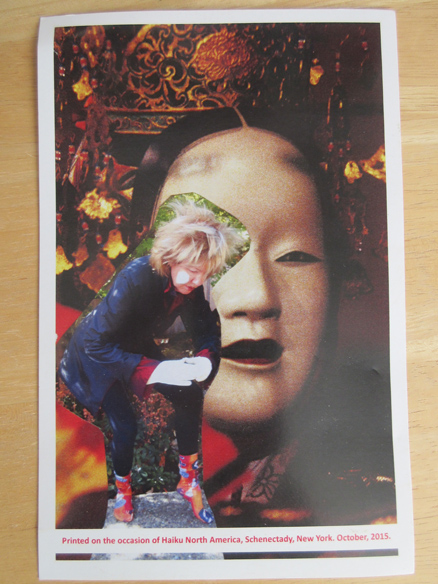 If you’re short on time, or are budget-conscious, you can also print postcards on cardstock at home. Just be prepared to spend lots of time cutting them. In this example, Claude Rodrigue also added a touch of color by hand. 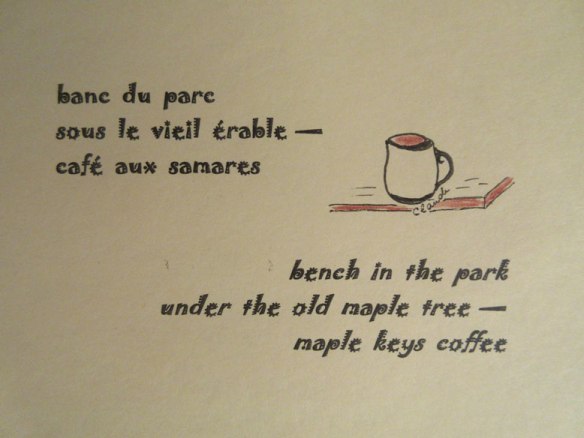 Whatever style you chose, make sure to order your postcards early if you want to receive them before the conference.

Did you ever a produce a postcard for a conference? Are you considering creating one? Share your tips.

Postcards not for you? Try a bookmark.

Here are 8 clever ways to display your haiku (as seen at the Seabeck Haiku Getaway 2013).

1. Weathergram: hang your haiku outside for everybody to read.

(Our weathergrams featured poems from Haiku World, by William Higginson)

2. Haiku Mobile (aka “The Sputnik”), an original idea by Tanya McDonald.

(Margaret McGee guided us through the construction of a labyrinth which we then decorated with haiku and natural objects.The labyrinth stayed for the entire conference, for everybody to enjoy.) 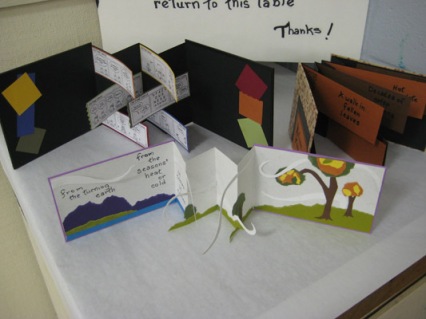 (Susan Callan will teach a flagbook workshop at Seabeck Haiku Getaway 2014. Isn’t that a beautiful way to display your haiku?)

5. Haiku Board (creation by Susan Constable):

(Susan Constable celebrates each published haiku by printing them on a colorful piece of paper and putting them on a board. She now has two boards in her office! Wow!) 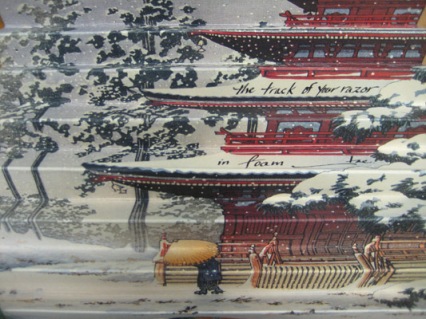 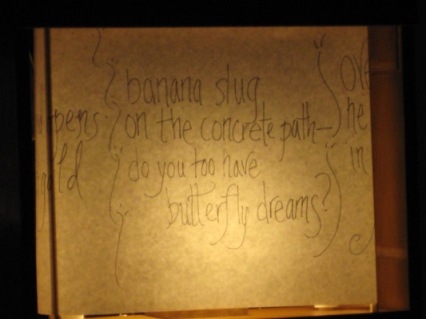 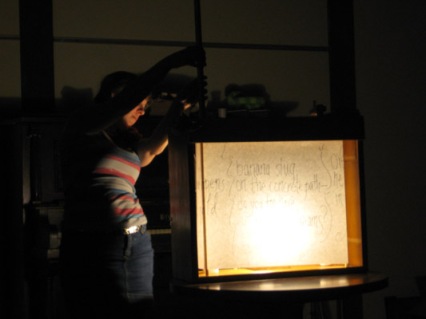 (Dejah Leger created a crankie featuring all the poems submitted at the kukai. Beautiful!) 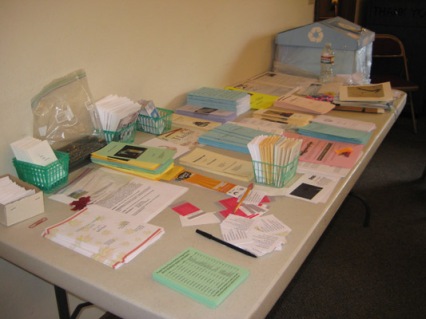 Don’t hide your haiku in your drawers! Display them proudly!

Subscribe to my blog to receive updates by e-mail (enter your e-mail address in the box on the rightside).

The Haiku Canada weekend took place at the York University Glendon College in Toronto from May 18 to May 20, 2012. 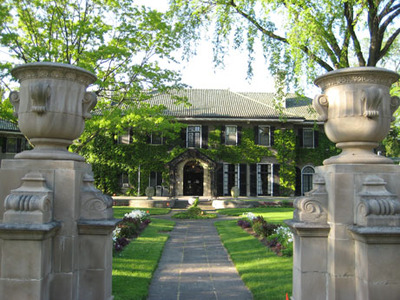 All the activities took place in the ballroom of the Glendon Manor(yes, a manor!), a beautiful building with cobblestone, a garden at the front and a rose garden in the back.

In the rose garden, garding the fountain was stone frog sitting on a turtle`s back which captivated all the haiku poets, of course.

After checking in, the haiku poets mingled and enjoyed some refreshments.

At 7pm we started assembling the Holographic Anthology. (For those not familiar with the Holographic Anthology: all poets had to submit 102 copies of one haiku handwritten and signed. Playing cards, memo, 1 dollar bill, gingko leaves, flags were some of the medium used by the participating poets).  Even with 15 poets helping, it still tookabout 2 hours to assemble all the copies. People who submitted to the anthology received their complimentary copy on the spot (other contributors will receive one copy in the mail).

One of my favourite activities at Haiku Canada is the night renku lead by Marshall Hryciuk.  On the first night, with a dozen poets participating, we manage to complete 36 links between 9.00pm and 12.30pm.

– read your haiku out loud (even visual poetry). The sound is important.

– plural or singular? (the Japanese don’t differentiate it’s implied in the context) you have to choose

– ambiguity is good, but don’t be vague

– be precise (what kind of roadkill?)

– no punctuation (or just one)

– no personnification (tatoos are not smiling)

10:15 -11 am Greetings from the new Haiku Canada president Terry Ann Carter and keynote lecture “The development of Haiku in Canada into Haiku Canada”

Haiku as a performance art, by Hans Jongman

Japanese students think haiku is hard to understand and to compose. In the Haiku Koshen competition, 2 teams of 5 members each (red versus white) read one haiku each and then have to face a cross-examination from the other team (is the haiku good or bad, etc.). After the cross-examination, the judge vote (with a red or white flag) to designate a winner.

4.15-5.15 Francophone poets Luce Pelletier, MichelineBeaudry, Huguette Ducharme were invited to read by Master of Ceremony Mike Montreuil.   I read from Janick Belleau’s D’Ames et d’Ailes since she couldn’t be there with us.  (Her tanka book which won the Canada-Japon award).

In short, she says, a good haibun=good title, good prose,good haiku. She notes that she likes the haibun published in Notes from theGean.

8.00 Haiku Canada was celebrating its 35thanniversary this year and, during the launch of the annual HC members anthology, we were able to re-live the creation of Haiku Canada through stories and photos of its first founding members: LeRoy Gorman, George Swede, Marco Fraticelli, MarshallHryciuk who were meeting back then at the house of the late Betty Drevniok, and later on met at the Monastery.

The new HC Anthology features one page per member (a bio and 2 haiku per poet). All HC members will receive a free copy in the mail.

10.30pm-1.30am Night renku lead by Marshall Hryciuk. The second night was more difficult. As more people went to bed early, a small group of us (5-6) was left to find links to difficult verse like ”kokopelli`s flute”.

At the next table, the Living Legends of Haiku Canada (as Marco Fraticelli called them) were at a separate table laughing and talking excitedly. “What are they doing?” I asked.  “They’re doing an anti-renku.” answered Melanie Noll. “What’s an anti-renku?” “A renku that doesn’t have any rules and doesn’t have to make sense”.  I wanted to join their table badly as we struggle to find a verse to link to “kokopelli’s flute”.

As we were starting verse 22 (out of 36) a sudden cry of victory came from their table (courtesy of Anita Krumins): “We are finished. We have 36 verses. La la la!”. The Living Legends (George Swede, Anita, LeRoy Gorman, Nick Avis, etc.) then went to bed and the room got suddenly very quiet as we struggle to find links to yet another difficult verse.

The motto of the anti-renkuites is *nemo saltat sobruis” (nobody dances sober). Since we danced a lot, Heather has placed this on the cover of the broadsheet: “Warning: may only be read if accompanied by a chimpanzee.”

One of my favourite moments of the conference was Philomene Kocher performing a haiku in movement.    Philomene read/performed the following haiku:

on the same branch

Movement: fist to the hip (rosehips),  fist to the side (roses), fist higher up (buds),arm brushing/extending to the side (on the same branch), arm moves up (august)and down (evening).  The movements had the simplicity and beautify of haiku. A beautiful haiku performance! 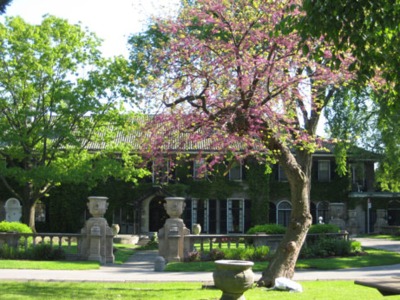 “Gingko walks are stressful. You’re in a new environment. You can get lost.”

Usually, after a haiku conference, I suffer from haiku overdose and it usually takes me a couple weeks (sometimes months) to get to the piles of books I brought back.  However, as soon as I got back home, I immediately read Mike Montreuil’s book of haibun “The Neighbours are Talking”.

Mike Montreuil is one of my favorite haibun writer. His haibun often refers to his loved ones (wife, daughter and animals) and where he lives on the outskirt of Ottawa.  His prose is filled with tenderness and humour.