song of the katydid–

even the field cow

Make up your mind, Snail!

You are half inside your house,

I cast no light…

In the distant hills
A patch where sunlight touches
The withered meadows.
– haiku by Shiki (trans. by Donald Keene)

Since January 2016, Old Pond Comics is published in Japan. I’ve been working with Emiko Miyashita, a haiku poet who is writing a monthly column on haiku translations for the new journal Haidan. Every month, Emiko sends me three haiku and I provide a haiku-cartoon to accompany her article.

The publisher sends me copies of the journals, but only months after publication, so Emiko occasionally sends me pictures of what the article looks like as soon as she gets her copy.

Here’s a photo of the May 2016 issue showing beautiful Japanese items on her desk. She gave me permission to share this.

In the distant hills

A patch where sunlight touches

for the spring sun… 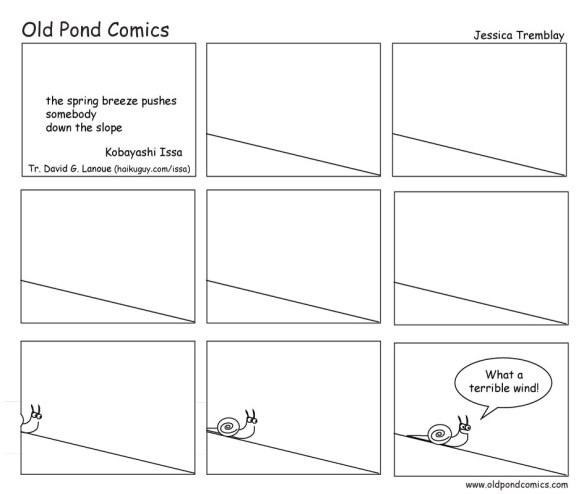 for the spring sun…

This is my submission to NaHaiWriMo for days # 7/8 nearest/native.